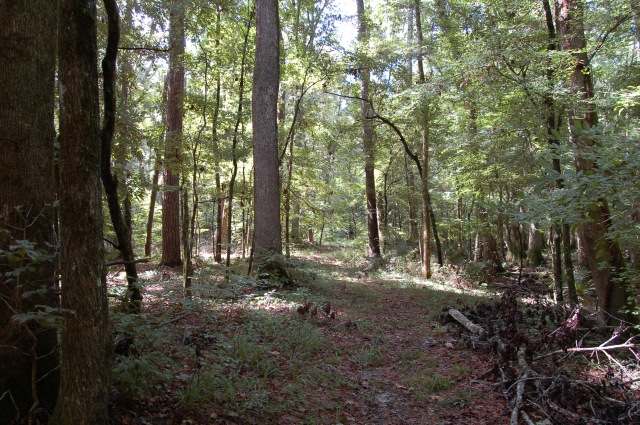 After leaving the gate, the path angles off to the southeast. They cut the timber here back in the late 1950′s, and the loggers left a God-awful mess. The one positive result of all that, besides the money that kept my family from losing the farm, was the road the loggers built to get the timber out of the swamp. That’s been our route in and out ever since, mostly on foot.

As you go deeper into the forest, the ground elevation begins to drop. The road―path is actually a more accurate term―follows along a ridge with the high ground on the left and the swamp on the right. These are clearly two separate worlds. The high ground is thickly forested with hickory, bay trees, live oak, maple, beech, and sycamore, and there’s nothing on the right but palmettos, bald cypress, and tupelo (black gum or bee gum). Those are about the only trees that can survive where the roots are underwater most of the year. 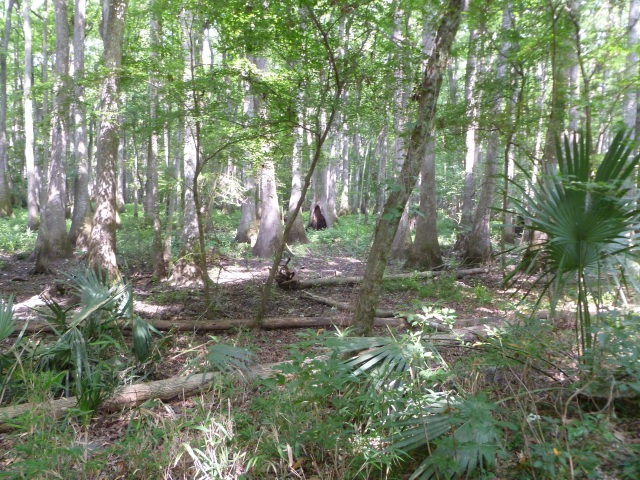 The swamp’s pretty dry right now. In the springtime when the trees begin to put on new growth and leaves, they literally suck all the moisture out of the ground. When autumn comes, the trees will release the moisture and the water should be about a foot deep in here.

I can’t come in here without stopping by my favorite tupelo tree. It doesn’t look a lot different now than it did all those years ago when I stole honey from the bees that lived there. There’s a big hollow at the bottom that’s just right for a beehive. The bees are gone now―I can’t remember the last time I saw a beehive. They seem to be disappearing all over the country and nobody knows why.

The tupelo honey that I found here is a delicacy―there’s never been much of it. It can’t be produced in a controlled environment like a bee farm―it has to come out of the swamp where the tupelo trees are. My grandma had a booth at the farmers market, and when she put my honey on the table, it would sell out in a matter of minutes. I bought my Ted Williams baseball glove with tupelo honey money.

The bees never seemed to mind when I robbed them. They had a sort of puzzled attitude regarding my intrusion into their world. They’d crawl all over my hands but never bit me―seemed to be trying to ignore me, actually. The important thing to remember here is to be gentle and don’t smash any bees. Smashing bees is guaranteed to change their attitude.

I rest my hand on the tree and remember…

Big Ed Made the Best Coffee I Ever Had

Anytime I went to visit Uncle Ed, my feet would be on the floor at five o’clock in the morning, ’cause I knew that come hell or high water, Big Ed would be in the kitchen making coffee. I was a young man in those days, and I wanted to learn from an old pro. He made the best coffee I ever had, and he was the best storyteller I’ve ever known, before or since.

He’d already served four years in the Navy before WWII, and when the Japanese bombed Pearl Harbor on December 7, 1941, Ed went down to the recruiting office and joined up again―it was the patriotic thing to do. After basic training, he shipped out to the South Pacific and didn’t come home for the next four years. This ol’ boy had been around.

It was not a tidy operation. He’d set the percolator on the countertop, take out the strainer, pack it full of coffee, and brush the excess off the top with his fingers. A lot of coffee got wasted. Then he’d fill the pot from the faucet, stick the strainer back in the pot, and set it on the red-hot front burner of that old GE stove.

Watching him stumble around the kitchen was about like watching a half-blind ox―probably, the case or so of Pabst Blue Ribbon beer we’d put away the night before had something to do with that. When he finally fell into his chair at the head of the long Formica kitchen table, he looked like he’d already done a day’s work.

Nobody’s said a word at this point―I’m still two-thirds asleep. Ed fumbles around in his shirt pocket, pulls out a pack of unfiltered Camels, and offers me a cigarette before taking one for himself. He knew I didn’t smoke, but he never failed to offer me one in all the years I knew him. He’d light the Camel with a kitchen match, and take a long drag like he was breathing life into his body.

After he blew out that first cloud of smoke, he’d start talking. I think it was really important to him that I was interested in his stories. He didn’t have any kids of his own, and I was a ready-made audience, hanging on his every word.

We’d have an intermission when the coffee pot boiled over, and he’d get up and turn it down to percolate for a while. My favorite memory of the man is when he finally sat down with his coffee―both forearms on the table―smoldering Camel in one hand―steaming cup of black coffee in the other. There was a tattoo of a chain with links about the size of quarter encircling both his wrists.

He might talk about life aboard a destroyer in the South Pacific during WWII, or baseball, or boxing. Jack Dempsey and Babe Ruth were his heroes. His favorite story was the Jack Dempsey/Luis Firpo fight. Ed couldn’t have been more than ten years old when the fight went down, but he’d listened to it on the radio and he knew it by heart.  I’d feel like I was right there in the Polo Grounds watching the fight when he told the story.

I’ve been trying for the rest of my life to re-create the taste of Ed’s coffee. I’ve used distilled water, fancy coffee makers, and expensive brands of coffee. It just doesn’t work. That coffee was a place in time, involving an impressionable young man who had relatively few tales to tell, and a grizzled old man who appreciated someone listening to his tales. Now I’m the grizzled old man, and I hope someone will listen to my stories.

A Springtime Walk in the Deep Swamp

Going into the swamp on our farm can be a less than pleasant experience if your timing isn’t right. In late fall and winter you have to be on the lookout for hunters. Our land is posted, but Bubba and Junior ain’t above a little trespassing.  You know the type―they get bored when they don’t see any deer after the first few minutes and start shooting dogs, cows, and anything else that moves. I have this recurring vision of Bubba wiping away tears as he tells the TV reporter how sorry he is that he shot me, and that he truly believed that I was a deer when he pulled the trigger.

In the summer months, the mosquitoes and yellow flies make you miserable, and rattlesnakes and cottonmouth moccasins are abundant in the thick undergrowth. They can have the place as far as I’m concerned.  But in the early spring the swamp is nice. Bubba and Junior are out on some lake fishin’, drinking beer, and discussing important issues, like whether or not rasslin’ is fake. The snakes and mosquitoes are still groggy from their long winter’s nap, and it’s a good time for a walk in the woods.

There’s a length of chain that loops around the gate and hooks over a rusty nail to keep the gate closed. I unhook the chain and push the gate open wide enough to pass through. As I close it and hook the chain back on the nail, there’s a gnawing anxiety that I won’t get it back tight enough. If you leave slack in the chain, the cows can get their noses in the crack between the gate and the post and force the gate open. Then the whole herd gets loose in the swamp and it’ll take a few days and a lot of work to get everybody back where they belong.

I’ve had my ass beat about that one. It was a long time ago, but when my old man beats your ass with a hickory limb, you remember it. He is old now and he can’t beat anybody’s ass anymore―he can just barely walk―but I guess you might say it’s been ingrained into my psychological makeup to latch that gate back properly.

Stepping through the gate is a step back in time for me.  I won’t say how many years, but it’s been a lot of ‘em.  Going through that gate takes me into a world that’s still pretty much just the way it was when I was a small boy―I can’t think of any place else like that…